The 10 most successful projects of Fuorisalone 2020

Let's say goodby to 2020 with our selection of the 10 events that have well interpreted the potential of digital, but not only.

The 2020 is now approaching its end. It is the conclusion of a year that, starting from its own critical issues, has provided an opportunity to highlight the strengths and flaws of a form of communication as unconventional as the digital one.

Studiolabo has taken the field with Fuorisalone.it, developing a 5-month design communication format. We started in June with the launch of Fuorisalone Digital and its tools (Fuorisalone TV, Fuorisalone Meets, Fuorisalone China and Fuorisalone Japan) to arrive in October proposing Fuorisalone Design City, a hybrid version, between physical and digital, of the usual Milanese event.

Most of the companies and players in Italian and international design were also able to embrace this opportunity by engaging in original proposals, showing themselves to be active when the whole world was forced to stand still.

In this scenario we have seen very satisfying results, in some ways unexpected. Like the type of users who visited our platform in 2020, which turned out to be very different from the traditional ones. If in past years the average Fuorisalone.it audience was mainly linked to the physical event on the territory (the Fuorisalone), during 2020 a more sectorial type of user came forward: insiders, professionals really interested more in the content than in the event. A more profiled public, attracted not by the temporary phenomenon, but by the product itself.

As Fuorisalone.it, we thought of illustrating a selection of 10 events that, in this hybrid form between the digital and the (little) physical, have been an opportunity to show and open up to a new way of communicating with the public. 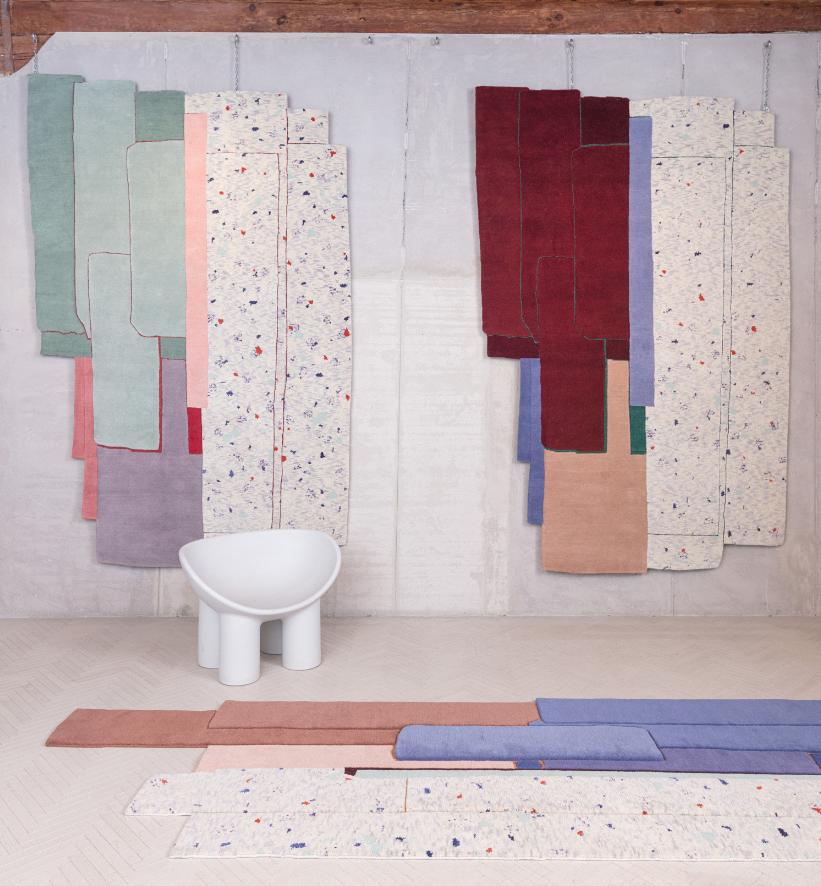 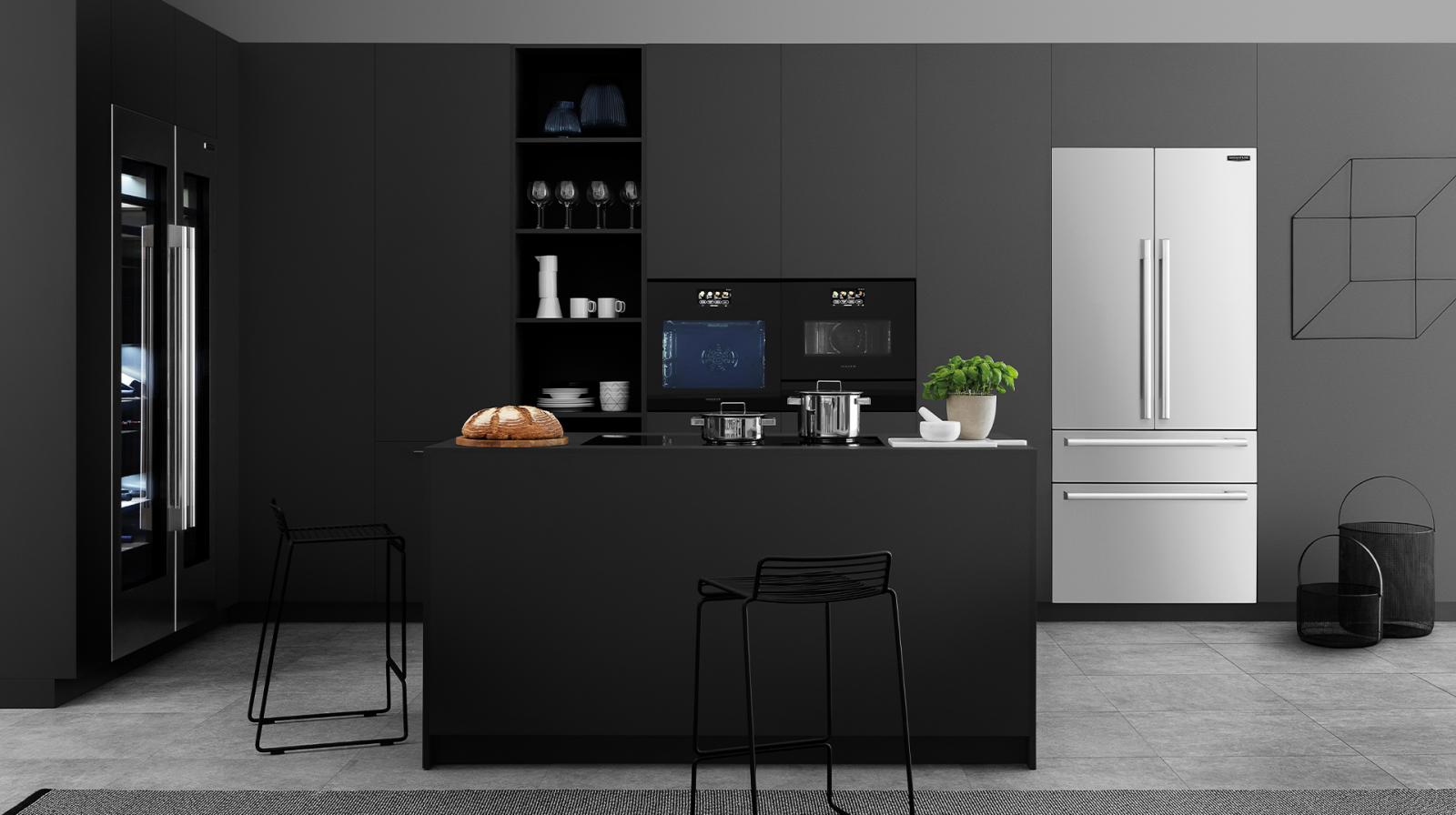 SIGNATURE KITCHEN SUITE
Signature Kitchen Suite, the new brand of high-end built-in appliances part of the LG Electronics group, chooses the digital medium to announce the opening of its first showroom in Europe, in Piazza Cavour in Milan, which will be a new reference point in the city for lovers of food, design and innovation. 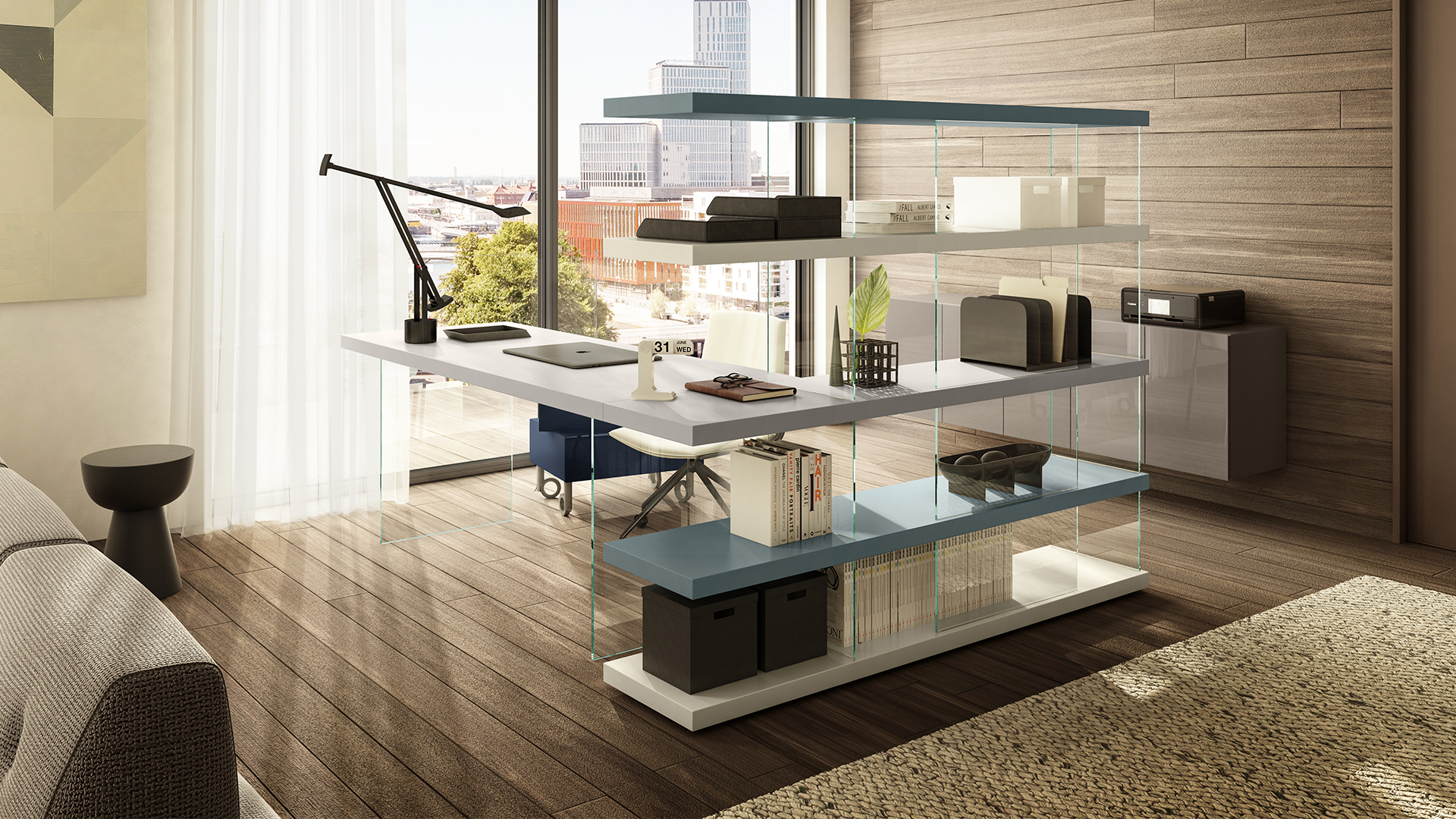 Lago presents the LAGO Home Office collection: a project born during the pandemic, from the curiosity to respond to the new needs of contemporary living and from listening to the company's community of architects, interior designers, dealers and customers. The collection proposes transversal solutions, designed to guarantee customization, spatial flexibility but at the same time privacy and living comfort. 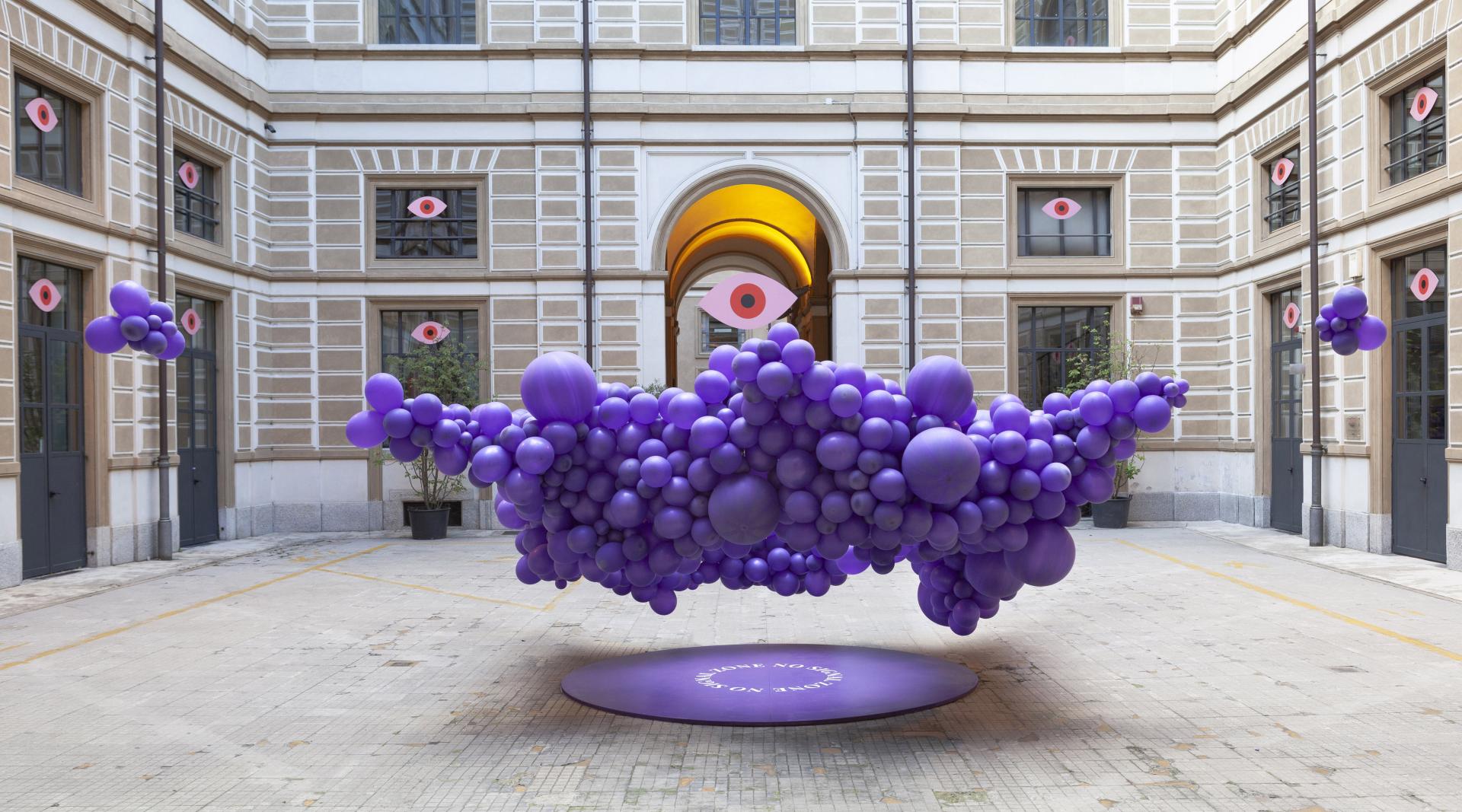 NO SIGNAL ZONE – POSSO REGALARTI LA DISCONNESSIONE?
The talented designer Sara Ricciardi presents NO SIGNAL ZONE, a cloud of purple balloons located in one of the beautiful Milanese courtyards in the 5Vie district, on the occasion of Fuorisalone Design City. An evocative and intentionally very Instagrammable installation, an invitation to disconnect temporarily to connect to the world, to life, to the "here and now". 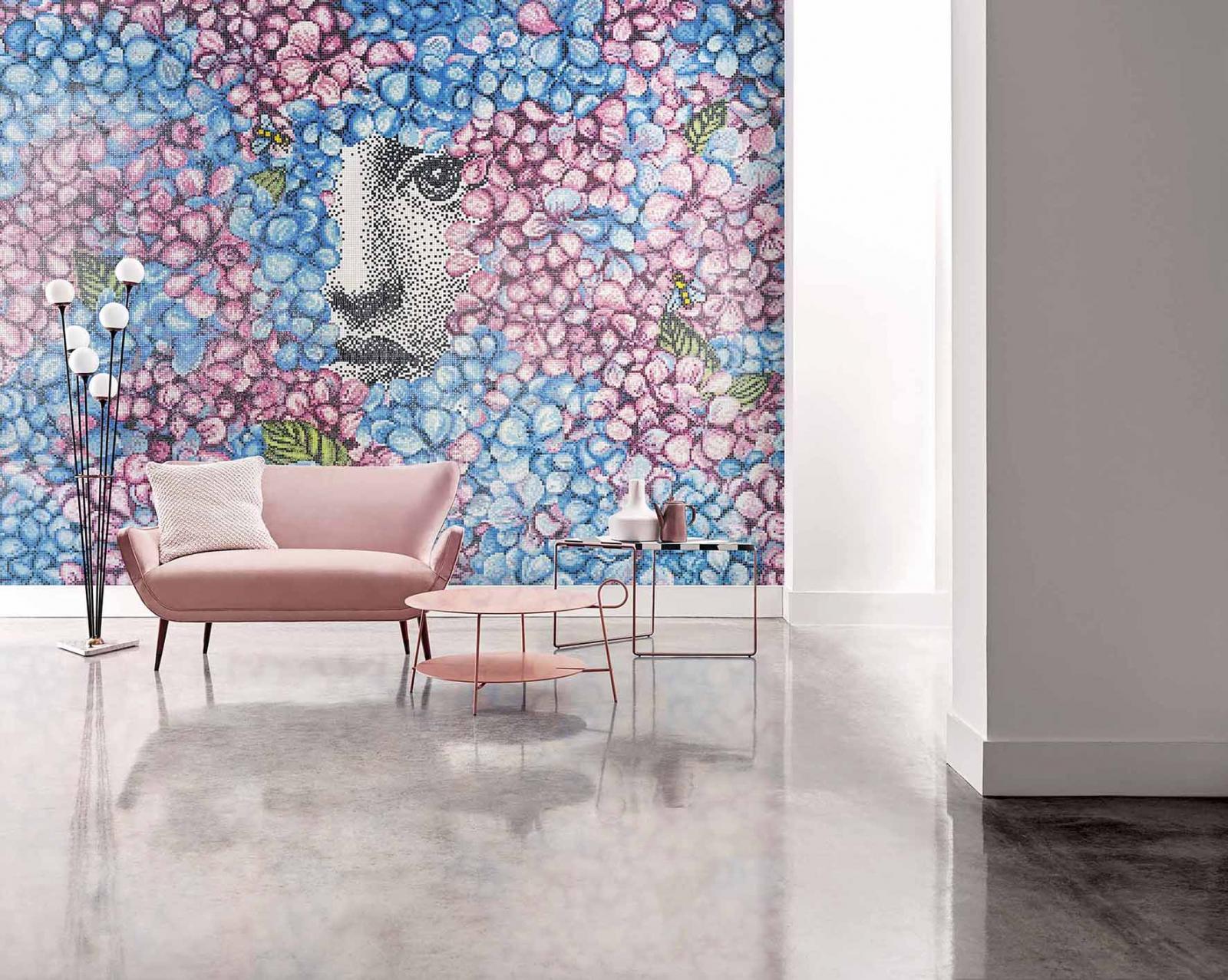 BISAZZA
Four original new mosaic patterns (Ortensia, Bocca, Serratura, Soli a Capri) are born from the encounter between the historical brands Bisazza and Fornasetti. The "Fornasetti" trait and his iconic figures are rendered through decorations that enhance the brilliance and transparency of the glass pieces and through the refined combination of sixty colour shades. The collection is presented not only virtually, but also in the recent flagship store in via Solferino in the heart of the Brera Design District. 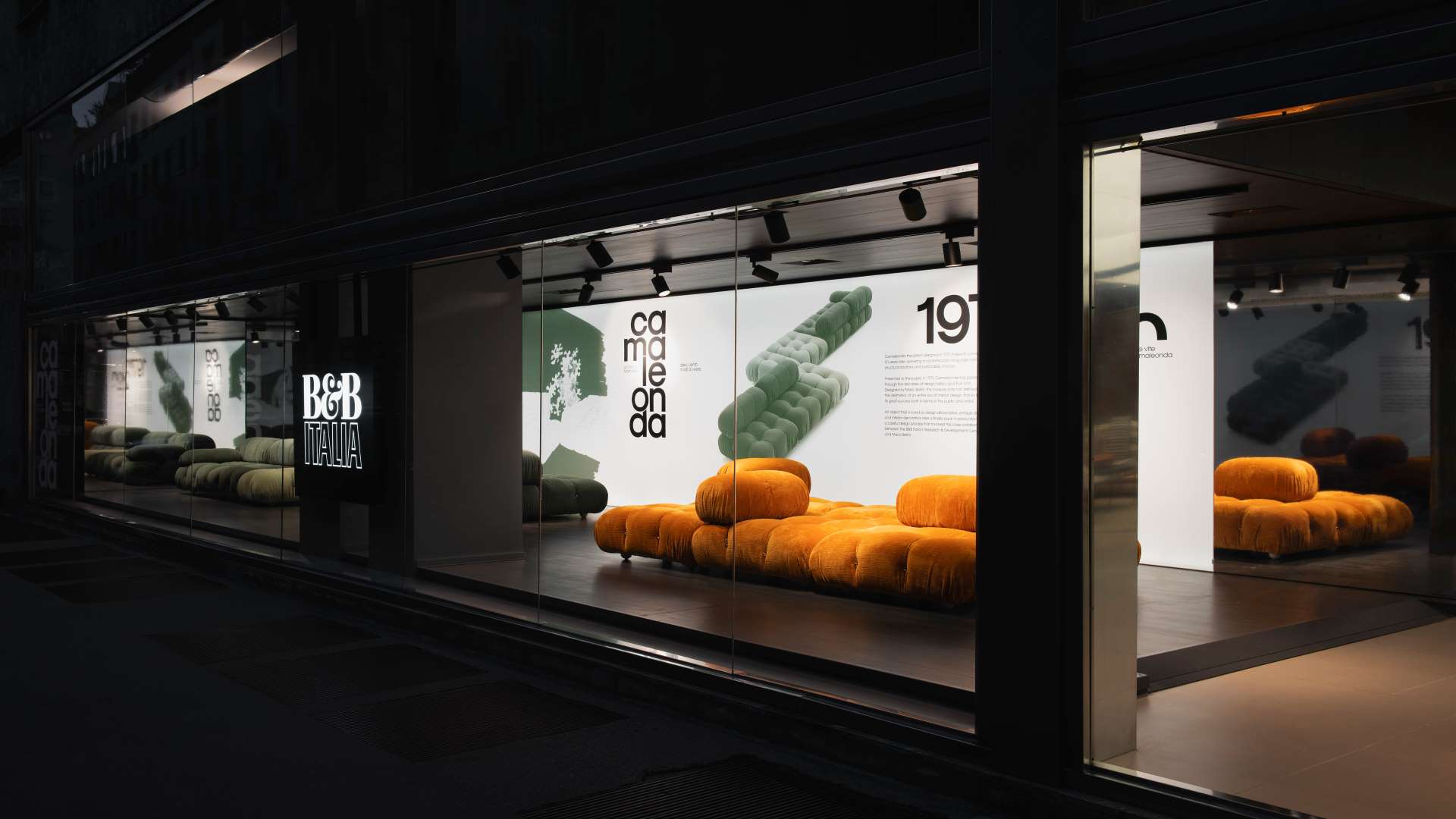 B&B
B&B Italia presents the new collection that starts from the home as an evolving landscape, capable of welcoming design objects with a strong architectural presence. Powerful, bold products, able to combine city and home, large scale and domestic dimension, by Mario Bellini (with the re-edition of Camaleonda, for which a virtual presentation has also been made, which can be viewed here, Blitz and Cutter), Piero Lissoni (with Liagò) and Yabu Pushelberg (with the Naviglio seating system). 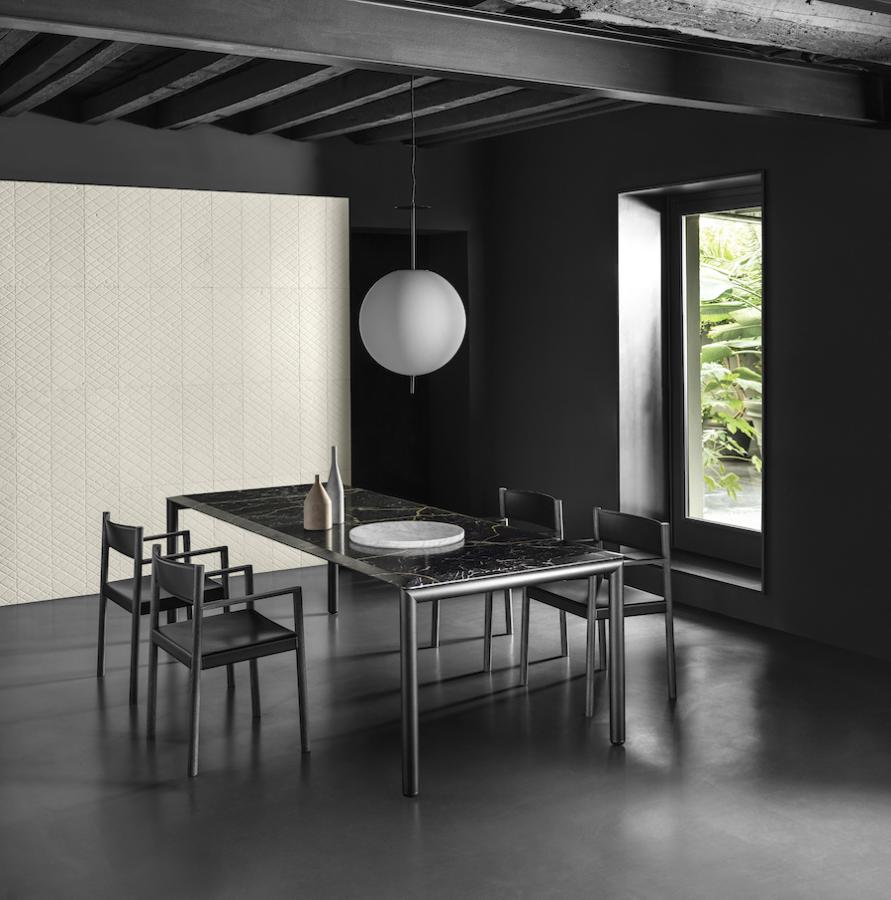 SALVATORI
Salvatori, the well-known Tuscan company, presents its new collections of home accessories and complements in the setting of its iconic showroom in Brera. After a first digital launch in April, Salvatori introduces also physically, on the occasion of Fuorisalone Design City, the new creations realized in collaboration with Piero Lissoni, Yabu Pushelberg, Elisa Ossino and Federico Babina. 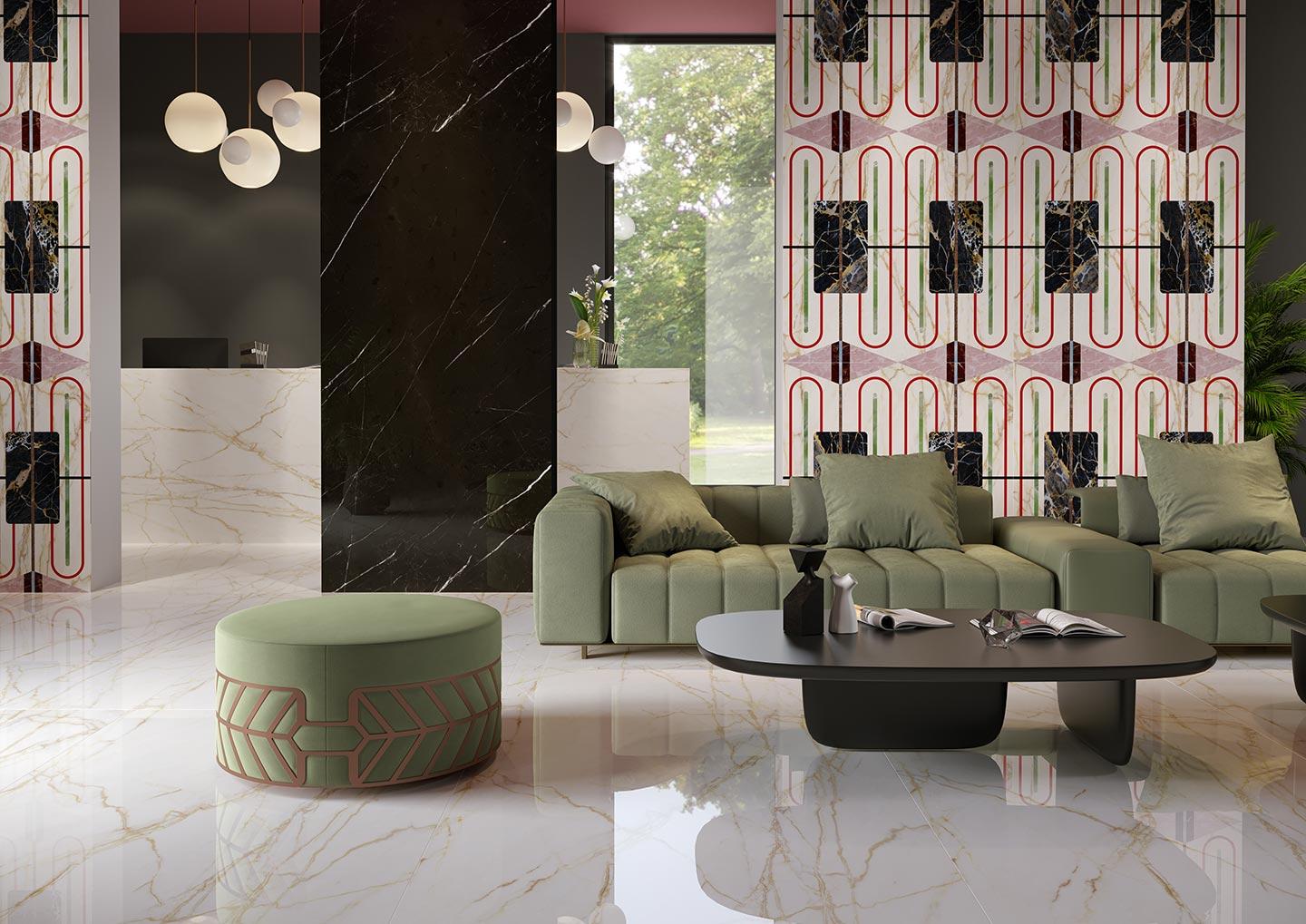 CEDIT
The technological research of the Florim Group is combined with the creative spirit of Elena Salmistraro who gives life to "Chimera", the new collection of the CEDIT - Ceramiche d'Italia brand. Four families of large slabs (Empathy, Roots, Rhythm and Colour) characterised by a marked visual extroversion typical of the designer, with subjects that mix different codes of stroke and colour with cuttings derived from the surface appearance of stones, fabrics and leathers. The video is still visible on Fuorisalone TV. 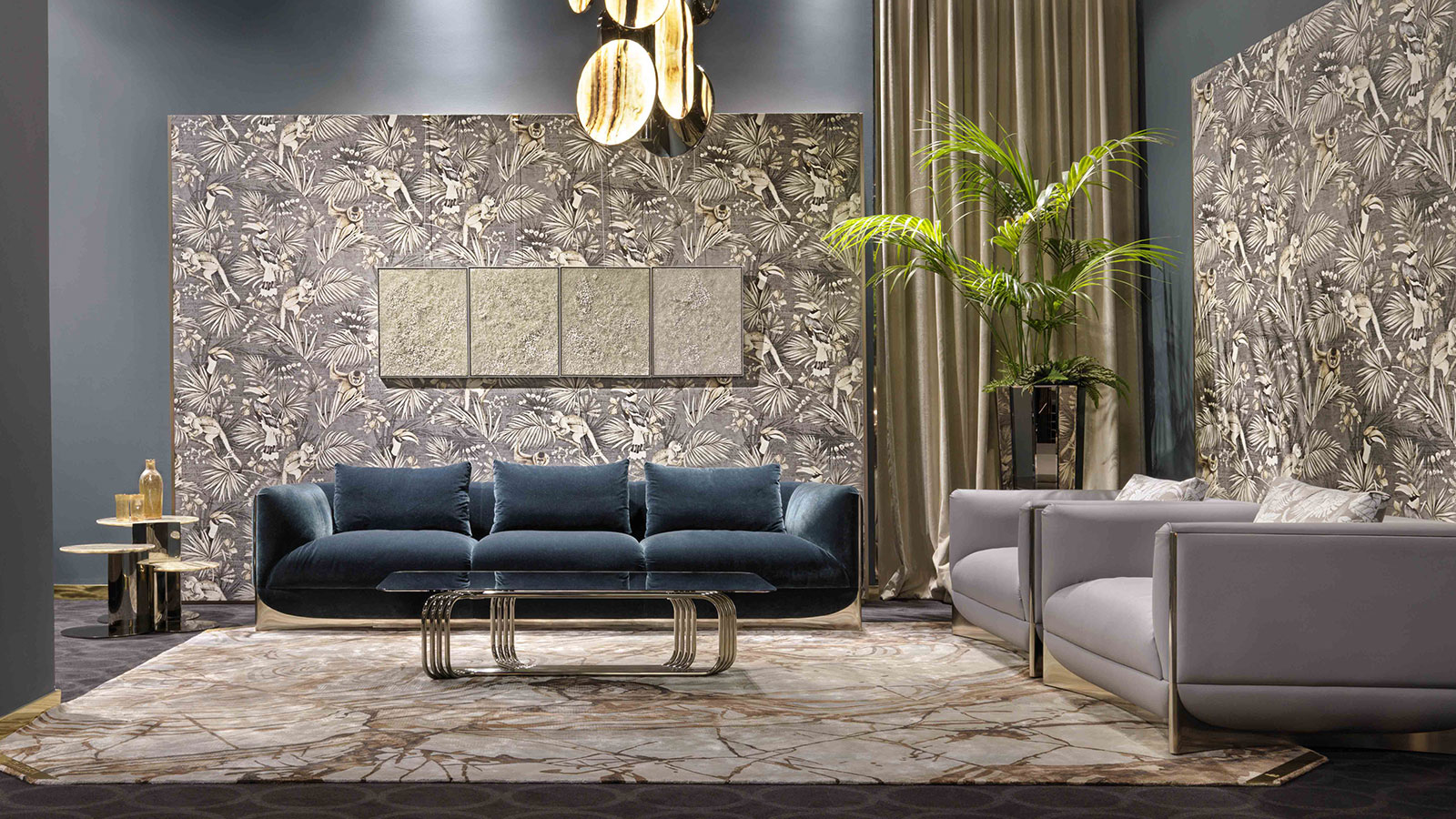 VISIONNAIRE
Visionnaire presents Beauty, the 2020 collection that illustrates the company's aptitude for creating products of extraordinary uniqueness and beauty. This year Visionnaire expands its Art Design proposal, setting itself the challenge of contextualising it in a retail perspective and involving exceptionally talented designers (Draga&Aurel, Alessandro La Spada, Mauro Lipparini, Marco Piva and Marc Ange). The brand takes full advantage of the potential of Fuorisalone Digital, presenting a series of 3 live talks that embrace the fundamental themes of the company's creative journey. The videos can be viewed at this link. 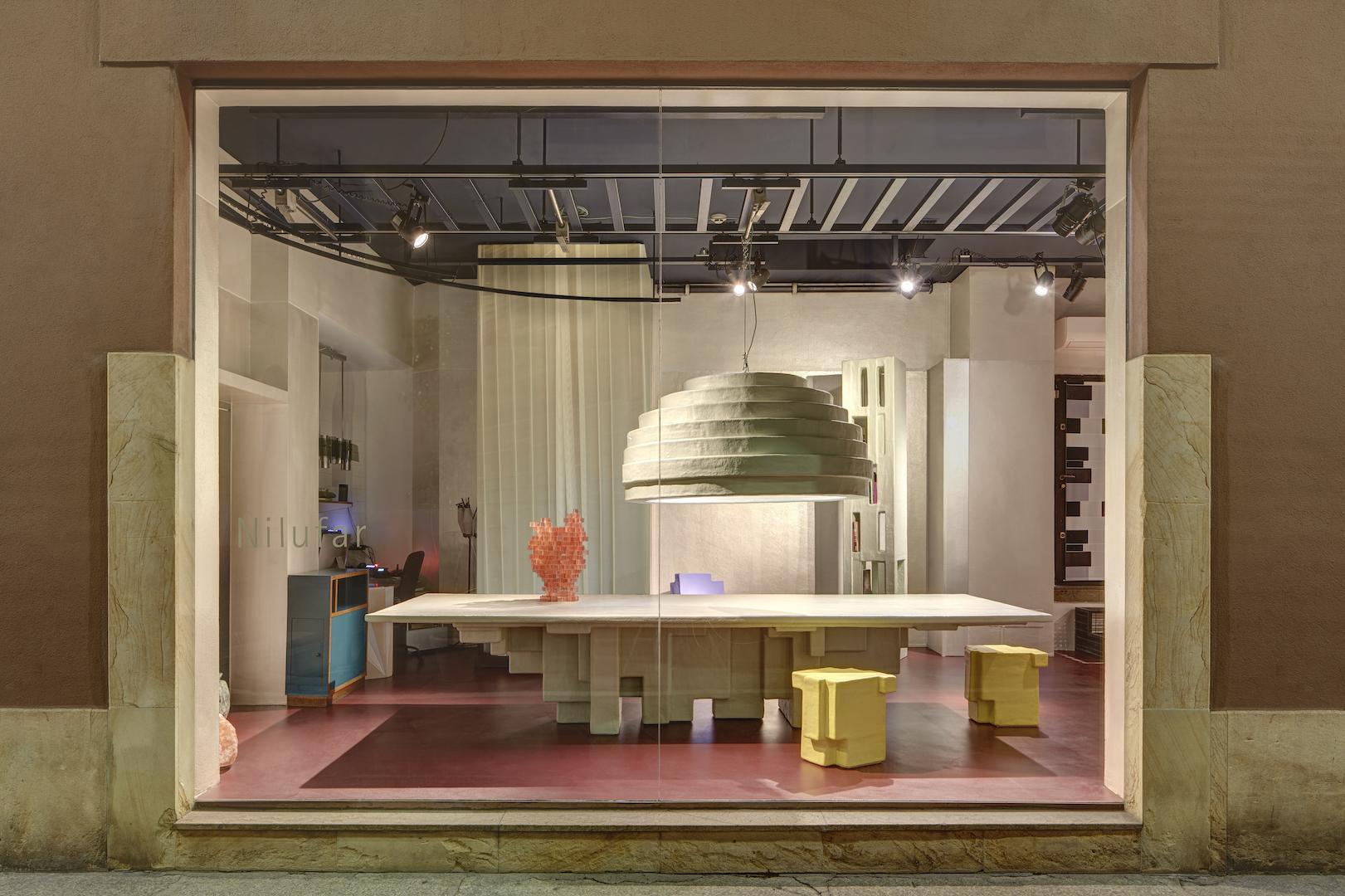 NILUFAR
Once again this year Nilufar Gallery amazes us by presenting the works of contemporary designers with a precise design aesthetic, strongly characterised and iconic. Studio Nucleo, Bethan Laura Wood, Martino Gamper, Massimiliano Locatelli and Federica Perazzoli demonstrate how, through their works, their constantly evolving poetics and philosophy find perfect agreement with the pioneering vision of the Milanese gallery.

With today, we enter 2021 and with it we hope for a return to a physical everyday life, with a new edition of Salone del Mobile postponed to after the summer and with a double edition of Fuorisalone, digital in April and phygital in September. It is impossible not to take into account what 2020 has been, and the importance and role that digital has played in communicating and promoting design around the world. Indeed, digital has shown its peculiarity of being able to create a historical memory, accessible over time thanks to increasingly dedicated tools.

Digital, therefore, can only maintain an active role in support of the more traditional form of displaying design, the one we are most used to, the physical form, which has been thrilling and training visitors to Salone del Mobile and Fuorisalone for years.

Subscribe to L'indispensabile, our weekly newsletter about everything happens in design. And not only.

Thanks to concrete actions inspired by these values, Hyundai is the only car manufacturer to offer all possible solutions for sustainable mobility

Thanks to concrete actions inspired by these values, Hyundai is the only car manufacturer to offe...

The Danish brand's new fabrics are the result of collaborations with international designers such as Karin An Rijlaarsdam and Patricia Urquiola.

The Danish brand's new fabrics are the result of collaborations with international designers such...

5 online exhibitions for the weekend

A selection of events to see at home from the couch.

A selection of events to see at home from the couch.

The new LAGO Campus, between innovation and sustainability

A wooden structure characterised by large windows facing Monte Grappa. This is Zaettastudio's project for the Veneto-based company.

The lift? Call it without pressing the button

nCaved, a house-cave by Mold Architects, in the wonderful landscape of the Cyclades Islands

The Greek architects' studio has built nCaved on the island of Serifos.

The Greek architects' studio has built nCaved on the island of Serifos.

Space Escape, a collection of pillows and carpets by Elena Salmistraro for Moooi

A journey into space in search of new inhabitable worlds, among shapes, colours and suggestions.

A journey into space in search of new inhabitable worlds, among shapes, colours and suggestions.

Curated by Federica Sala, the exhibition is an opportunity for widespread creativity and artistic vitality, in a particularly difficult moment for the world of culture and art.

Curated by Federica Sala, the exhibition is an opportunity for widespread creativity and artistic...

"Sleep capsules" for the homeless arrive in Germany

Small architectures have appeared in the city of Ulm to welcome the homeless during the cold winter nights.

Small architectures have appeared in the city of Ulm to welcome the homeless during the cold wint...

Design Emergency: how the design world is tackling the pandemic

An interview with curator and journalist Alice Rawsthorn, who, together with Paola Antonelli, founded the Instagram profile investigating the role of design in building a better future.

An interview with curator and journalist Alice Rawsthorn, who, together with Paola Antonelli, fou...

The designer from Friuli inaugurates her collaboration with Saba Italia with a sofa with sculptural shapes reminiscent of the Seventies.

The designer from Friuli inaugurates her collaboration with Saba Italia with a sofa with sculptur...

A journey to reflect on the themes of production and design through the great protagonists of twentieth-century design.

A journey to reflect on the themes of production and design through the great protagonists of twe...

The third edition will take place from 5 to 10 October with a series of events in the historic centre of Como and the lake.

The third edition will take place from 5 to 10 October with a series of events in the historic ce...

Nearly 10,000 entries from 52 countries: winning entries to be selected in March.

Nearly 10,000 entries from 52 countries: winning entries to be selected in March.